Perfect matching with other famous brands such Marx, Jecsan, Hing Fat and others.
Please note : Soldiers of other brands do not included in this lot and showed for comparsion only.

The Khazars were a semi-nomadic Turkic people, who created what for its duration was the most powerful polity to emerge from the break-up of the Western Turkic Khaganate. Astride a major artery of commerce between Eastern Europe and Southwestern Asia, Khazaria became one of the foremost trading emporia of the medieval world, commanding the western marches of the Silk Road and playing a key commercial role as a crossroad between China, the Middle East and Kievan Rus’. Khazaria long served as a buffer state between the Byzantine Empire and both the nomads of the northern steppes and the Umayyad Caliphate, after serving as Byzantium’s proxy against the Sasanian Persian empire. The alliance was dropped around 900. Byzantium began to encourage the Alans to attack Khazaria and weaken its hold on Crimea and the Caucasus, while seeking to obtain an entente with the rising Rus’ power to the north, which it aspired to convert to Christianity. Between 965 and 969, the Kievan Rus’ ruler Sviatoslav I of Kiev conquered the capital Atil and destroyed the Khazar state.

The Cumans (Polovtsi) were a Turkis nomadic people in the Cuman-Kipchak confederation. After the Mongol invasion (1237), many asylum in the Kingdom of Hungary, as many Cumans had settled in Hungary, the Second Bulgarian Empire, and Turkey before the invasion.Related to the Pecheneg, they inhabited a shifting area north of the Black Sea and along the Volga River known as Cumania, where the Cuman-Kipchaks meddled in the politics of the Caucasus and the Khwarezm Empire. The Cumans were fierce and formidable nomadic warriors of the Eurasian steppe who exerted an enduring impact on the medieval Balkans. They were numerous, culturally sophisticated, and militarily powerful. 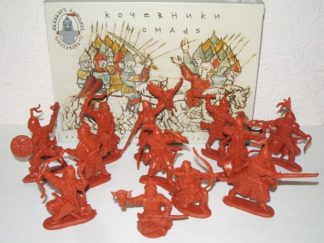