Only 1 left in stock

Zeus is Greek god of sky and thunder and the ruler of the Olympians of Mount Olympus. The name Zeus is cognate with the first element of Roman Jupiter, and Zeus and Jupiter became closely identified with each other.

Svarog is a Slavic deity. Svarog is there identified with Hephaestus, the god of the blacksmith in ancient Greek religion, and as the father of Dazbog, a Slavic solar deity. On the basis of this text, some researchers conclude that Svarog is the Slavic god of celestial fire and of blacksmithing.

In Germanic mythology, Odin is a widely attested god. In Old Norse sources, where most surviving information about the god stems, Odin is associated with healing, death, royalty, the gallows, knowledge, battle, sorcery, poetry, frenzy, and the runic alphabet, and is the husband of the goddess Frigg.

Heracles was a divine hero in Greek mythology, the son of Zeus and Alcmene. He was the greatest of the Greek heroes, a paragon of masculinity and a champion of the Olympian order against chthonic monsters.

These figures from test of DeAgostini “World Mythology” partwork serie. Each figure comes with colorful 24 page magazine about this character. (Magazines in russian language). “World Mythology” was tested only in Russia and never released as regular serie.

They are not from common european metal Greek Mythology DeAgostini serie !

Discontinued ! Last one set in stock ! 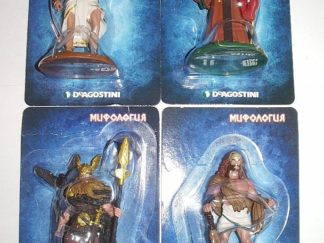